Have I ever told you about a girl named Cynthia? If I haven’t, let me tell you, she’s the most beautiful person and the gentlest soul ever. Kind and patient, and loyal to a fault. Childlike wonder combined with the wisdom of a sage—that’s Cynthia for you. And guess what, her birthday is on Sunday, March 22! So, to celebrate my friend’s birthday, I’ve designed this little amigurumi bunny girl named Cynthia.

Happy Birthday, my dear Cynthia! I’m so glad the universe conspired to make sure our virtual paths crossed and we bumped into each other.

So any guesses on what Cynthia did on her birthday? She spent it with her best friend Maiya, exploring one of the old palace courtyards at the Patan Durbar Square.

The girls wanted me to take a picture of them at Sundari Chowk, one of the main three courtyards of the palace at Patan (also known as Lalitpur, the city of fine arts), and I dared them to stand between these carved wooden figurines of maidens astride intertwined serpents below the wooden latticed doors. To say that the girls were terrified out of their socks is an understatement. 😉

Maiya then announced a photo next to a wood carving of Ganesh, the elephant-headed god, was in order. She quickly hopped on to the pedestal and dragged a slightly reluctant Cynthia along. I had to beg them to get out of there before they were caught monkeying around by the security guards. 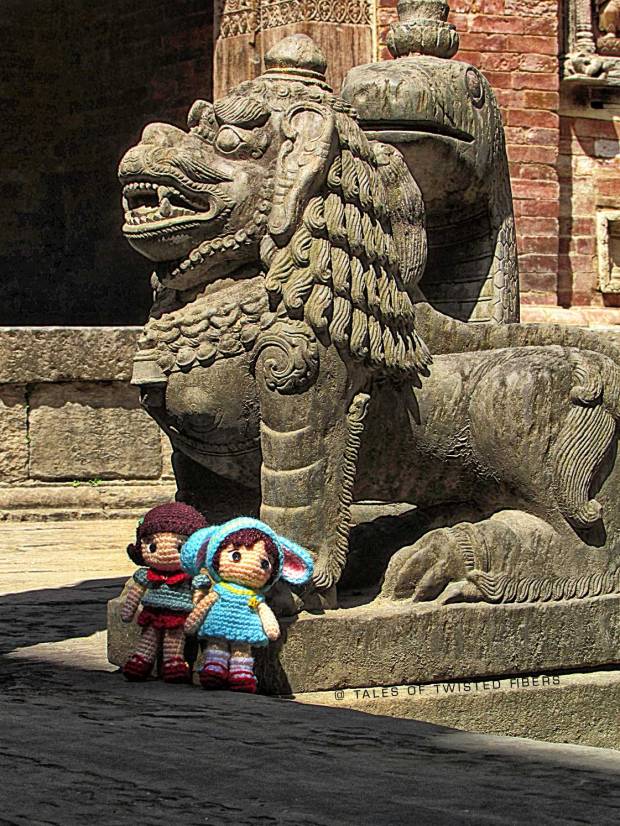 Next, Cynthia, the birthday girl, wanted to see Tusha Hiti, the ancient step-well that is guarded by mythical lions and serpents with jewels on their hoods. Here they are, trying to skirt their way around the scary lion to get a glimpse of the tank. Don’t the girls look scared silly? 😀

Built in the 17th century, Tusha Hiti—with three tiers of exquisitely carved stone deities on its retaining walls—is the centerpiece of the Sundari Chowk, one of the main three courtyards of the palace at Patan. 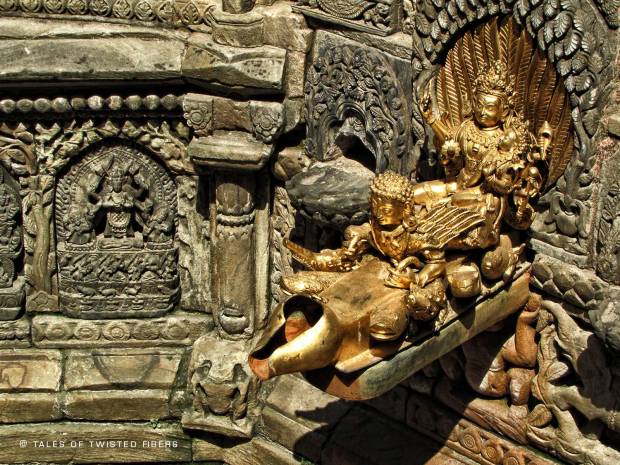 This gilded bronze spout portraying an image of Laksmi-Narayan on Garud was installed in the tank a few years ago after the original was stolen.

Then we headed to the Bhandarkhal water tank, hailed as an “exquisite example of 17th century water architecture”. Located in the garden behind the palace, this tank was once the main water storage facility for the palace. Much to Cynthia’s dismay, the tank was dry! 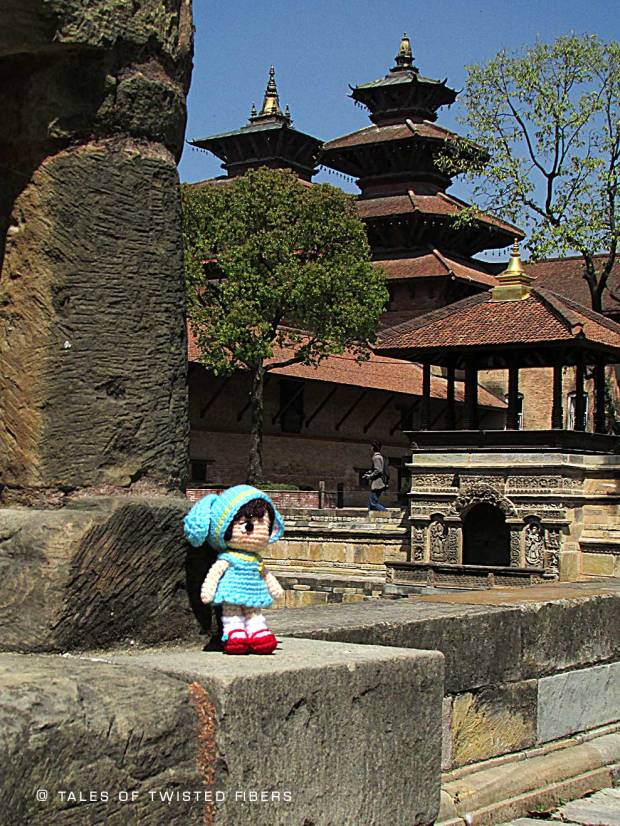 See how sad she looks.

Never the one to miss a photograph opportunity, Maiya handed me the camera and promptly hopped next to Cynthia.

In this pic, the girls are standing behind the hind leg of one of the stone lions flanking the Bhandarkhal tank. Overlooking the tank is a meditation pavilion, a feature which fascinated Cynthia. Just as soon as she had started daydreaming about time travelling back to the 17th century when the palace was in its full glory, a very loud and boisterous Maiya announced she was famished and insisted we leave immediately for the nearest eatery. And that, ladies and gentlemen, ended our little Cynthia’s birthday trip to the old palace.

To download the pattern in DUTCH, translated by our fellow crocheter Jeannette Kemp, click here.
Thanks for helping me celebrate Cynthia’s birthday. If you like, you can leave a birthday message for our birthday girl in the comments section below. I’m sure she will be thrilled to hear from you. 🙂

If you liked this free amigurumi pattern, would you please consider making a small donation to Animal Nepal? Animal Nepal is a not for profit, animal welfare and rights organization based in Lalitpur, Nepal. It runs two sanctuaries for abused and injured homeless/working animals, besides campaigning for animal rights. If you want to see the wonderful work these folks do, you can check out their Facebook page or their blog. You can also help them by donating here.

Thank you for caring.

My youngest aunt loved Christmas. Every December, she’d get super excited about decorating the house. In fact, every year she would recruit me to be a part of her two-person Christmas decoration squad. She actually did most of the heavy lifting; I was just the assistant whose job was to pick up the Christmas tree ornaments from the storage box and hand them to her while she did the actual decorating. She passed away earlier this year.
Making up my own crossover universe. 😉
Wes and his pumpkin plushie wish you a spook-tacular Halloween! 🎃
Just downloaded The Sandman: Act II from Audible. Now I'm all set for the next 13 hours 48 minutes! 😁
As I wait for the September 22 release of The Sandman Act II, I figured it was a good time to make one more amigurumi based on a character created by Neil Gaiman. This time it's Death of the Endless.
It took me two audiobooks—including ‘The Hidden Power of F*cking Up’ by @tryguys—to finish these but they are finally done and I couldn’t be happier! 😁 Say hello to my *Try Guys Collect-A-Boys Figurine* inspired amigurumi. 👑
Gus! ♥️
Yeon, the Nine Tailed Fox 🦊
Season 2 confirmed! Who else’s excited? 🤩